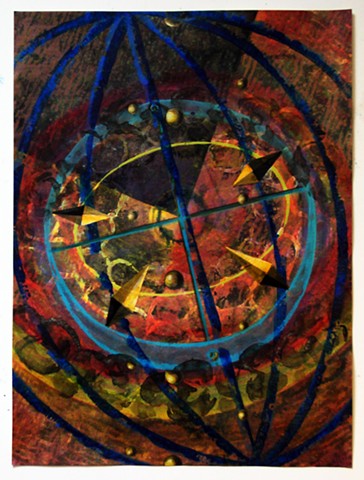 Study for Blowing Smoke Rings at a Sundial
ink, acrylic, and tempera on paper
24" x 18"
< previous

Blowing Smoke Rings at a Sundial

Once, at the first signs of a wildfire in Southern California, I walked out of the library at the artists’ colony where I was the resident caretaker and looking up, saw a smoky, orange sky that completely obscured the sun. We evacuated right away and three weeks later it was safe to return.

Last summer the smoke from a fire in the Jemez Mountains to the west of where we are now living revisited that eerie light as the setting sun was consumed in smoke.

I remember seeing photos of an historic billboard advertising Camel cigarettes that was engineered to blow smoke rings. The smoke was actually steam and the estimate is that 200 million were launched over Times Square during its twenty-five year existence.

Beginning an essay on Samuel Beckett’s “Company,” Guy Davenport describes the shadow of a second hand as it progresses around a wristwatch. He ends his description of the second hand and its shadow by saying: “You have, for instance, an accelerated hothouse sundial that nips along 1,440 times faster than the real article; you have a simple model of the solar system, you have something to keep you company.”

I imagine a hammock in that hothouse garden, from which I might blow smoke rings across the nearby sundial and cause its seemingly ancient measure of time to flicker as does the ticking second hand. Either represents an artificial interruption of the movement of light and time measured by its momentary absence. [ I gave up smoking in 1988, by the way.]

We really cannot keep this kind of tally, no matter how sophisticated the technology or sunny the daylight hours. Our attention and our need to measure are conflicted here and so we blow smoke rings into the light – a spanner into the works – confounding our own minutes in the process. No catching up; no repeating. And really, there is no record that we can sponsor throughout our days by watching a shadow march across the face of the sundial.