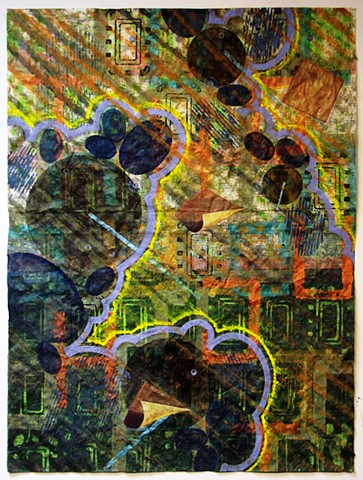 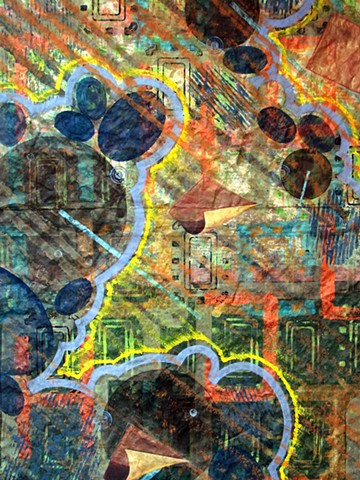 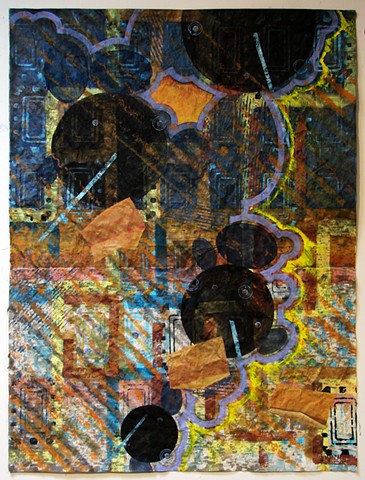 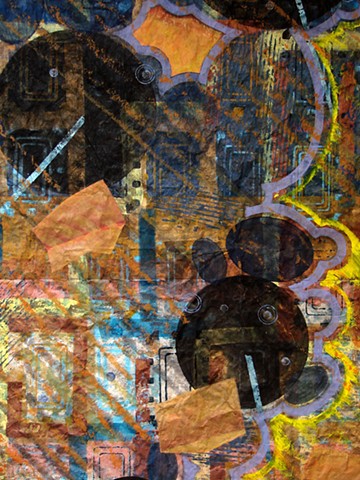 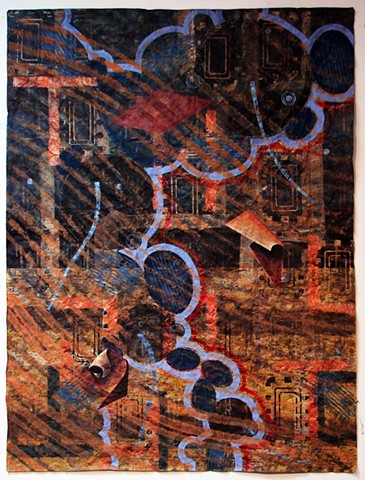 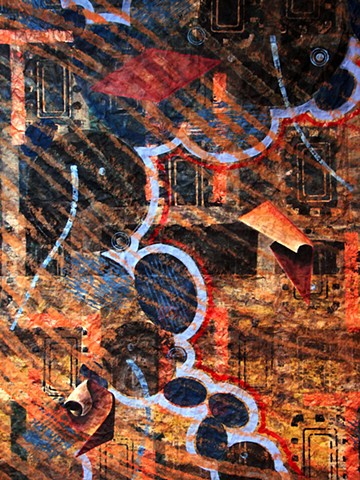 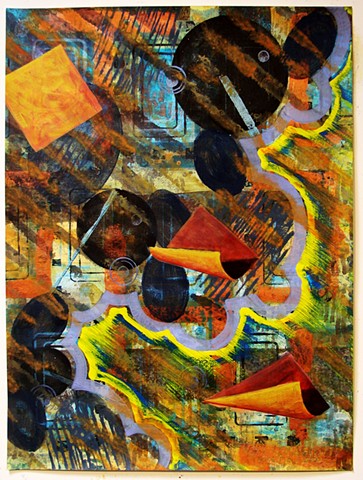 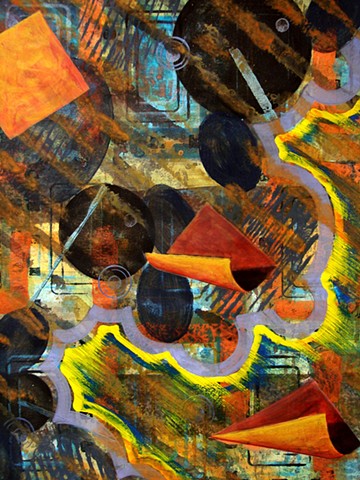 The development of any thought seems to come from a background area and then move forward until it has either joined like ideas or begun to search out some explanation of itself within us. We say that something ‘moves to the forefront of our thoughts’ a process I just attempted to describe and also the subject of a small group of paintings. A certain amount of outside looking in and inside looking out is necessarily both a reflection of the thought process and the way a painting might begin to describe that process as well. I chose three sub-headings that might guide the paintings into specific kinds of either thought or speculation about the thoughts that these sub-headings might give rise to. The paintings themselves began with similar treatments or layers: first a grid, then simple upper-case letters that spelled out ‘THOUGHT’ ranging from top to bottom and then reversed to read ‘up-side-down’. The letters were fitted to the grid and read diagonally back and forth across the surface. All the while the cartoon image of a ‘thought bubble’ kept reminding me that a boundary for the larger subject of ‘thought’ still needed to be established on top of the background layers. Bubble and diagrammatic circle that indicates detail were combined in the next step: painting a series of flat, dark circles of diminishing sizes across the surface. These were augmented by a second group of circles and ellipses that crowded around them, a loose interpretation of the ‘thought-bubble’ mentioned earlier. Now the paintings could proceed into their more specific subjects, as follows:

Recall (Memory) How we learn hinges on memory and so recalling thoughts in useable ways becomes part of our survival and growth as human beings. Our species seems gifted with the capacity to hold a remarkable amount of information and ideas within our so-called ‘memory banks’, the vaunted vaults of our sense of being. These days, with the ubiquity of the computer, we often are compared to these machines as they calculate and store information and ideas as well. While we selectively take outside stimulus and generate our own ideas, we do use our recall and memory in much the same way that we task computers to. It might be argued that since we control the input of the computer it is dependent upon us and our guidance with regard to what is selected to input. On the other hand, it could be argued that much of what we take in ourselves is not so much under our control as we might like to believe. It has often been suggested that without the benefit of serendipity and its often happenstance and random qualities we would not be able to move our own ideas beyond a recurrent track without innumerable repeated cycles. So, time and place and often the element of chance and surprise deliver recall to unexpected revelation and new ideas.

Relearn (Narrative) Without structure however, ideas picked serendipitously might easily disappear before their novel content can be processed for potential recall and use. Storyline and narrative allow us to relearn what we have taken in and mentally processed in memory. These structures accommodate networks of thought that become larger systems of ideas based on all that our senses and recall have made into the raw material of mental building blocks. Mnemonic possibilities expand with the development of our narrative capabilities. Maps and the maps of storytelling have always been the tools of humanity and its history, a history enabled by thought, stored and processed. To be able to describe the concept of change is an historic example of this and one that has encouraged our species to develop language, arts, sciences, and myth.

Return (Curved Space) Since Einstein proposed it, the concept of curved space has captured our imaginations. Even with the proofs and potential evidence discovered by Stephen Hawking and a generation of new physicists and cosmologists, curved space remains an image, a formula, the kind of speculation in science that most thinking individuals are still perplexed by. We rely on our sensory intake to furnish our imagination with images and qualities that we can think about with some degree of clarity. Curved space, like the circles around a ‘thought-bubble’ suggest a looping kind of return. ‘Haven’t we been here before’ becomes a companion to notions of time travel that suggest that we might arrive before we have departed. Our thoughts search for proofs of a kind that may not be within the realm of these new concepts of time. Distortions in the way water and reflections bend form and shape into complexities that are difficult to identify seem akin to the idea of curved space. Surely a different kind of gravity and the intensity of its influence would come into play and these are experiences that aren’t particularly earth-bound. And yet, we do return to the idea of curved space and its intrigue holds on like the narrative of mysteries and other fictions that may resemble our own lives and recreate an arc of experience we think about, perhaps over and over. Many of us might even like to return, reincarnated with our current consciousness intact enough when, someday, curved space is just another part of our on-going story!