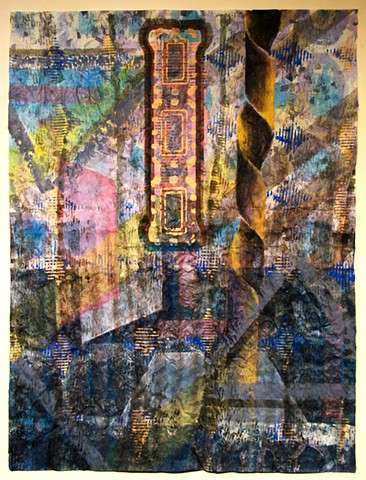 a ’countdown’ essay for the coming year in five parts

As the sun sets on a wintry November day, the foreground trees darken and the violet-grey clouds behind them are haloed in an orange twilight. There is a progression towards the horizon that while it diminishes in detail and color still registers as a march into the fading day, one group of trees behind another like a succession of generations on a timeline. But it’s all backwards! The movement away seems reversed as if in a mirror. That is, as the light disappears from close-up and the smaller, distant clumps of trees subsequently fade, it’s as if, instead of the dawning of new generations in daylight, they are marching old to young towards the end of the day. This parade into the sunset is almost like the darkness that war promises, especially to the young as they have been conscripted to defend the ideas and legacies of their forebears. A serene but twisted magic show in this windy cold afternoon brings the sunset on this parade of trees – my strangely imagined mirror of generations – that somehow reminds me of Thomas Hardy’s 1916 poem, “The Pedigree”:

I I bent in the deep of the night Over a pedigree the chronicler gave As mine: and as I bent there, half-unrobed, The uncurtained panes of my window-square let in a watery light Of the moon in its old age: And green-rheumed clouds were hurrying past where mute and cold it globed Like a drifting dolphin’s eye seen through a lapping wave.

II So, scanning my sire-sown tree, And the hieroglyphs of this spouse tied to that, With offspring mapped below the lineage, Till the tangles troubled me, The branches seemed to twist into a seared and cynic face Which winked and tokened towards the window like a Mage Enchanting me to gaze again thereat.

III It was a mirror now, And in it a long perspective I could trace Of my begetters, dwindling backward each past each All with the kindred look, Whose names had since been inked down in their place On the recorder’s book, Generation and generation of my mien, and build, and brow.

IV And then did I divine That every heave and coil and move I made Within my brain, and in mood and speech, Was in the glass portrayed As long forestalled by their so making it; The first of them, the primest fuglemen of my line, Being fogged in far antiqueness past surmise and reason’s reach.

V Said I then, sunk in tone, ‘I am merest mimicker and counterfeit!- Though thinking, I am I, And what I do I do myself alone.’ - The cynic twist of the page thereat unknit Back to its normal figure, having wrought its purport wry, The Mage’s mirror left the window-square, And the stained moon and drift retook their places there. So, back to the paintings at hand, and counting down from large to small I will attempt to describe the content as it is composed in layers perhaps much like Hardy’s strata in the moonlit window.

Piano, bass and drums with a complex time signature that can always be reduced to duple time (6/8 – 3/4 becomes 1/2)

Companions for life, the ability of these two to make an appearance is perpetual.

Trying not to always be the center of my own universe means asking for help from the multi-verse.