NM Paintings 2020 > Mirror of the Unknown 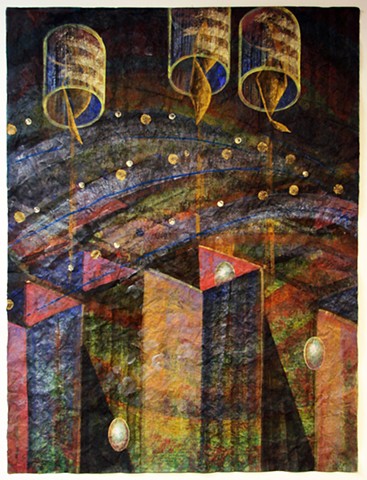 Mirror of the Unknown - Crashing Waves
ink, acrylic, and tempera on paper
49" x 37"
next >

"… It is no essential detraction from the originality and genius of Linnaeus to suggest that the basic wants of his own kind demanded a system such as the one he provided, and that if he had not developed it, no doubt someone else would have done so. And it is as well to notice that the system is not identical with the lives it codifies, though it ascribes names to them and says where they belong in its scheme of things. It is itself and illusion, and the perfection it aspires and pretends to is bound to life primarily through its source in the unsatisfied nature, the innate imperfection of human desire, ambition and anxiety. Out of that comes its goal and its procedure, which are the same: the deduction of structure and the labor of separation. Separation of role from role, species from species, and life from life. And abstracted from these abstractions, the isolated human species with its relative knowledge remains the mirror of the unknown." W.S. Merwin from The Tree on One Tree Hill in The Ends of the Earth

Perhaps our ‘isolated species and its relative knowledge’ may have learned that there are cycles that recur within and without, microcosmically and macrocosmically. Since these are a series of events in time, we might name their components and try to establish a timeline for what transpires. Nonetheless, even with these identifiers describing things for us, the scale and timeframes of these cycles is a good example of trying to polish the mirror of the unknown in the hopes of the reassurance that clarity promises us.

I have titled these three paintings to describe such a cycle: “Crashing Waves”, “Rising Clouds”, and “Falling Rain”. In total they represent a life cycle that is essential to our continued existence, and a concert of elements that support us in the best of circumstances, and yet may destroy us in our worst encounter with them. Consider: the rip tide, the lightning strike, and the deluge, with or without warning they might spell our demise. The collection of facts and up-to-the-minute data in these amended subtitles are a good example of the mirror of the unknown as well.

How might we read our autobiographical track across the years as we live in ever-changing conditions of environmental uncertainty? Einstein quipped that, “God doesn’t play dice” and yet, one of the most shared conditions of humanity is that of uncertainty. The mirror of the unknown is both an example of hubris – the superiority of the intelligent homo sapiens – and an equally desperate clinging to our lists, agendas, labels and cures. “We’ll get through this…’, we say, all the while aware of the crumbling foundations just beyond our sightlines.

Clues abound in cycles that we are a part of because we live within them. Even with our measured time, the seasons and slowly changing patterns of daylight and night gift us with a wellspring of reassurance that we could never have designed ourselves in the most efficient artificial environment. While we work and work at the mirror of the unknown, we are surrounded by what Lao tzu called “the way”- the Tao. When he disappeared, riding through a mountain pass in ancient China the passages he left behind describing the cycles that emerge still describe those aspects of our own existence that revolve around us. His text is never specific in the way our world view today expects, but it still manages to describe the connections between his world and ours, connections that flow in cycles.

These paintings are a meditation on the themes described above. Even taken out of their serial order one can imagine the direction that pushes them forward and connects them one to each, as well as to the viewer.