I
The Italian Futurists are now remembered for their fascist leaning manifestos and the paintings of movement that celebrated a range of subjects from the urban energies of building construction to a dog walking briskly while on a leash. Like comic strip imagery these paintings often featured echoing lines that trailed one behind the other like a moving reverberation. These trailing ‘tail lines’ were painted while the cubist aesthetic of Picasso, Braque and others were reassembling a world of prismatic fragments into Cubism. In some ways futurism is like a cinematic iteration of cubism, and certainly the moving and multiple viewpoints seem to borrow from one another.

We move towards a painting and then our eyes take over, scanning its surface and exploring the variety of spatial dynamics that are possible on a static two-dimensional surface. In illusionistic paintings that explore the depiction of three-dimensional forms in an accommodating space our eyes tell our brain that there is access here and we follow a ‘path’ into the painting, moving in and around the illusionistic forms that are portrayed. Figurative and landscape paintings are familiar examples of this kind of seeing. In less illusionistic paintings, we scan the surface dimensions of a piece and our eyes move around the composition, guided, or coaxed by a variety of compositional dynamics.

In both cases described above there are implied movements. We stand before the paintings and a kind of dance ensues in which perhaps the more successful or vibrant work is the leading dancer whose steps we follow, or whom we dance with as a partner. Like couples dancing, a tempo and shared momentum hold the dancers together in their dance. In some paintings the movement carries beyond the frame of the piece and either joins the empty space around it with a kind of continuing momentum, or dissolves like the trailing flight of birds. In other compositions we are held within its dance floor and bounce off of, or glide away from its physical edges.

II
Time and movement are the elements of migration that are universal across the planet. Destination, duration, distance, and species are variables that abide by time. Time also gives each migration and its movement the defining qualities of each event in the lifespans of the travelers.The monarchs’ and hummingbirds’ seemingly impossible journeys between the north and south American continents have totally different characteristics than the ancient patterns of a herd of deer or elk. Nonetheless, these are journeys that we can and have documented as observers aware of the statistics of distance and weather without being a part of the actual physical and mental travail. Our desire to understand the actual experience often recreates anthropomorphized fictions as we attempt to relate sympathetically to the migration of other species.

Our own migrations have a quite different quality, especially in recent times as we move about on the planet following the paths that we find ourselves on in our lives. The concepts of will, fate, and choice seem to collide with other forces that largely remain beyond our control. Despite the careful ordering of society and the political, religious, and philosophical systems that vie for the helm in that ordering process, we believe that we might set our own course as we raise our sails and chart a path.

III Big Yes and Big No

Sundial to nuclear chronograph, and along the way a water-clock too with ever more elaborate mechanisms, we’ve designed the days, hours, minutes, and micro-seconds into different kinds of pulses. Breath and heartbeat are theoretically aligned with the measuring tick of our clocks. The Sun hidden during our nocturnal rotation is anticipated down to the micro-second as we wrestle with the timelessness of the dream world in our sleep.

At the edge of the timeless past the menhirs of Stonehenge were aligned with the solstice. Then, sensing that more order would allow a lifespan that could also be measured, the days and months became calendar time and that gridded paper the new clock of our existence. Now the stories of the past and the visions and plans for the future could be calibrated and schedules established to blend the fact and fiction of time into a constant reminder of our beginning and eventual end.

Eventually, solar religions gave way to man’s history and the stories of intermediaries between our earth and many versions of a hidden ‘heaven’. Our species and its increasingly detailed and time-plotted sense of self became the sole attention of ‘providence’ and the sun was relegated to a supporting role in our story. Likewise we were then able to take on a stature that hypothetically allowed us to steer the destiny of nature, guided by our own sure piloting and the proofs of our scientific views, all measured with timely accuracy.

Perhaps though, while we labor minute by minute, the great solar eye that has watched this small and far from independent progress, takes note in a scale that belies our most forward-thinking chronographic imagination. One day, probably not a complete surprise to some but with an unexpected swiftness nonetheless, the great eye of the sun will blink, and we will disappear.
PREV / NEXT   1 / 8
BACK TO THE SUN IS A MIGR... 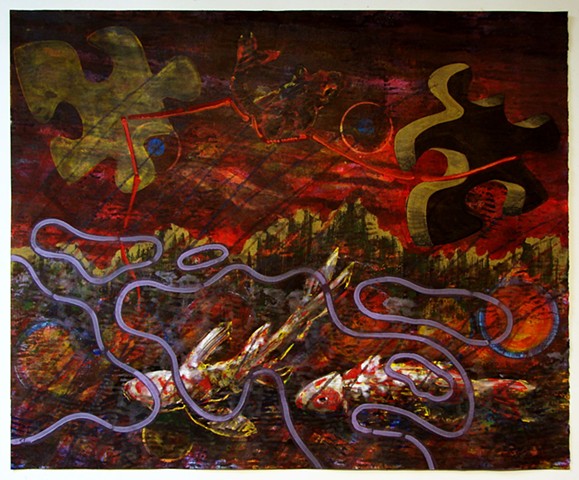