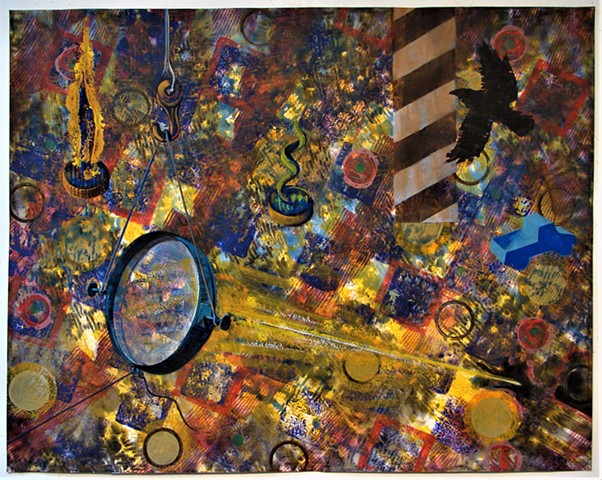 We’ve all read about how distracted Americans and others have become since the late twentieth century rattles on into the twenty-first. The need for almost constant stimulation from entertainment, the latest breaking news, updates in an onslaught across our platforms and devices has long since overwhelmed our abilities to focus. Focus on ‘what’? Focus ‘where’? It may be a combination of our impatient pace and the technology that enables it or perhaps it is a constant fatigue as well. Technology outstrips our attention as screens fill up with smaller and smaller type. Imagery is enhanced with color saturations and vibrance, while hi-definition and migraine-sharp resolution operate in a new hyper sort of space that is less about depth than it is about confrontation. Focus? Where? Focus on what?

Why focus? Isn’t it possible just to absorb, much in the same way we are encouraged to consume? First we were to learn speed-reading, and now a small computer whose screen is on one corner of our eyeglasses tosses a constant invitation for us to become walleyed as a form of peripheral vision! We can be trained to do almost anything, and quickly too. Knowing the consequences of ‘falling behind’ constantly nudges us forward. We move compulsively towards innumerable goals but the sensation is like pushing a carousel horse while the music plays and the lights spin with us.

We adapt, but are we perhaps also losing the will to focus? It seems almost impossible to step off the carousel because the ‘golden ring’ and its symphonic accompaniment of jingling cash registers seem to be writing the spinning script. Missing the ring too many times when the ride doesn’t just stop, there is always the threat is that one will be cast off and be too broken to be able to climb back on or too strapped to buy another ticket. But look at what is really out there in that stationary abyss?

Perhaps out in that quiet darkness is a different life – not life’s ceasing. When one foot moves aware of the next step out there a form of thinking may accompany you, a form of thinking that is as ancient as the stone ring on Salisbury Plain, a calendar of contemplation. Deliberately aligned with the seasons that our climate-controlled existence tries to deny, there are places in our environment out there that encourage contemplation and focus. Not finger-sized pause buttons but what we might think of as ‘islands’.

Step down. And as running slows to walking, one can begin to pick out in the formerly dark and blurred vision we saw from the spinning carousel, a new place that can become both island and harbor. Settling again in this harbor of thought might allow us to contemplate the extent of the new boundaries on our new-found island – a vast new tract to focus on.