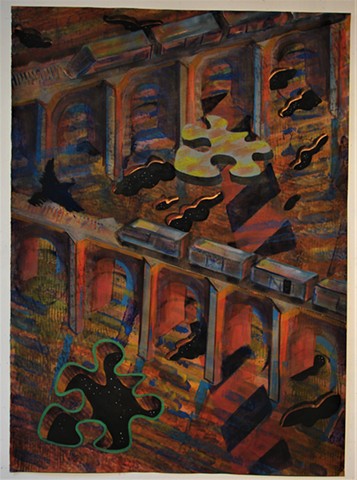 “When my ship comes in, I’ll probably be at the airport.”

Jim Harrison once quipped that he wanted to remove himself from living in the grid of a calendar. Every day is represented by a square and every twenty four hours we have advanced one square and perhaps not much more than that. Nonetheless, the numbered grid of days makes note of it all and nowadays the plans for ourselves are shared across all of our devices so that we’ll never miss another important up-coming event, whenever they might reveal their promises.

Procrastination has always been frowned upon in our world of progress and schedules. “Time is wasting,” is often the admonition to those who just missed the last train. Regret and worry take up the mental energy of those left on the platform, but in reality perhaps this is a hidden opportunity. When else have we been given “time to spare” than those long minutes waiting for the next train? Yes, we may be more “pressed for time” when we reach our destination, but nothing will really begin until we get there so…

One of the most overlooked responsibilities these days is that of the serendipitous realm of daydreaming. Grouped with the unproductive practices of procrastination and tardiness, daydreaming is unfairly characterized. In fact that space might be one of our most productive areas of thought, unprodded, unbridled, and free to make associations that we wouldn’t otherwise.

The expectations of late capitalism has given us all a calendar for our moments and it is a watchful worksheet that we can rarely elude. What is most overlooked, however, is the productivity of unscheduled thought. Somewhere down the line and in a realm of scheduling that we have no foreknowledge of, we all will make an unscheduled departure from the conscious realm we inhabit. It is the one train we never can miss. Until that hour arrives, how are we able to use the unique way in which we as homo sapiens can think and learn and do? Have the open avenues of individual thought been denied and somehow taken away from us? What do we need to do to take it back? Daydreaming on the platform seems a good place to start.